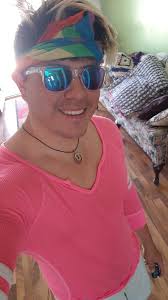 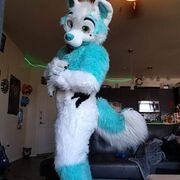 Zeek signed a ball for baconmutt at AnthroCon 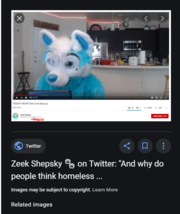 Screenshot of Zeek Shepsky discussing about people's speculation why he is homeless.

Zeek Shepsky or dapuppyz is a fursuiter and YouTuber who lives in USA.

Ouside of fursuiting, he usually wears a rainbow bandana on his fursuit head and a scraf on his neck. Other than that, he has a various of scrafs that he wears while fursuiting.

In 2019, Zeek had announced on Reddit Why Zeek Shepsky Is Leaving Furry Fandom post about the reason behind why he left the fandom. In 2019, due to massive drama occured around him, he had deleted and privated all social medias.

Zeek's fursona species is a dog husky. His body is coloured blue and white.

In 2019, in attempt to convince people that he is not homeless, he tried to convince furries on Twitter that rumors people questioned about his validity about his homelessness that are false. In the end, he failed miserable. Furries soon found out that he still invite friends to his house for a drink and still attending furry conventions when he was having financial difficulties. Other than that, there were furries speculated that he was not homeless, he even received financial supports from family and friends.

In 2019, in attempt to sell his fursuit, he had his Zeek 2.0 fursuit listed on The Dealer Den Zeek Shepsky Mischief Maker Fursuit Plantigrade post. Due to the minimum bid and lock price for the fursuit too expensive, he started receiving massive backlash, criticism and joke about him from the furries throughout the fandom. There were rumors about furries speculated that he puked in his fursuit head and he used his fursuit as a murrsuit. There's one rumor suggested that he possibly wears diaper inside while fursuiting. The furries started complaining about his starting price and lock price about his fursuit was too expensive due to fursuit being unwash and fursuiting was deteriorating due to 4 years of use. In the end, he failed to sell his fursuit.