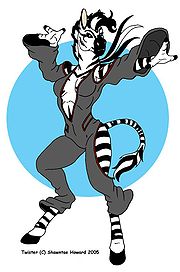 Twister, a fictional zebra character in Extinctioners
The Zebra is a relative of the horse native to the savannahs of Africa. The name zebra may refer to any of three extant species or eight subspecies of the genus Equus. It is easily recognized by the black and white stripes of its fur, which, like a human fingerprint, vary between each individual.

Unlike their close relatives, the horse and donkey, zebras have never truly been domesticated due to their unpredictability and liability to startle under stress. Therefore, hybrids are prefered for domestication. Hybrids of zebras and any other equine species are known as zebroids. Such hybrids include the zorse, zony, and zonkey.

Zebra characters are few and far between in furry fandom, though they are used occasionally as funny animal counterparts to humans of African descent.