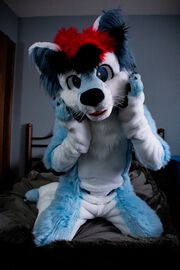 Zaros (born on March 31st) is a fursuiter, YouTuber, photographer, artist, content creator, student, who lives in Minnesota. He became a furry on June 4th, 2017. Zaros goes by the aliases: FluffyZaros and ZarosTheFurry. Zaros is currently working towards his Computer Science and Mathematics majors, as well as his minor in Spanish. He will be attending the UMD in late August of 2019. He is currently a Twitter content creator. However, on September 27th, 2018, he created a new Twitter account.[1] (as of September 2018). He also runs a YouTube channel.[2] (as of June 2019).

Zaros' fursona is a wolf with light blue and white as his main fursona colors. His ears are light blue with a white outline, as well as a darker blue inner-ear fur color. His muzzle has two small blue triangles, partially resembling a fox, as well as whiskers. His eyes are dark blue. Between the blue and white fur colors on the arms and legs, there is a very light blue color that separates the two. His paws and feet are white, with blue fingers and toes. His tail is light blue on top and white on the bottom. He is 5'6" (167.64 cm) and weighs 120-130 pounds.

His fursuit is made by Lemonbrat and was completed on December 7th, 2018, where more edits were made later. Shortly after that, his two Latex Catfish suits were created, where one is inflatable and one isn't. Both have the same designs. After that, Zaros purchased a digitigrade bodysuit of his fursona, which is expected to be done after Midwest Furfest] of 2019. Then, he bought a blueberry inflation suit and an inflatable latex suit of Zaros from the same company as each other (known as Squeak Latex).

Zaros is planning to fursuit for all, if not most, of his YouTube videos.

Zaros' created his Twitter account in June 2017 when he first joined the fandom, which was his first social media platform for his fursona. Zaros rarely used his account until February 2018, where he briefly posted a little about his personal life outside of the fandom. A couple of months later, Zaros gained a small audience and kept growing as he made daily posts about fursuit updates, life stories, and artwork. His first post that gained an audience of inflation furries was on April 5th, 2018, where he posted a comic by Hornbuckle, and gained over 200 likes on his tweet. On August 7th, 2018, Zaros reached his 1,000 follower milestone. On September 27th, 2018, Zaros made his final tweet on his Twitter account and stopped posting tweets for one week. He came back on a new account, announcing that his account was locked out permanently, due to a phone number verification lockout.

Zaros started to do photography and videography after he bought his camera. He started with photography first, which then changed into videography in December 2018, where he filmed his fursuit unboxing. The second video after that was an unboxing of his latex suit. He continued to unbox suits and started doing skits, suit up videos, and story videos. He enjoys doing skits as a hobby and likes to edit them and turn them into videos on YouTube. He plans on continuing his skit videos in summer of 2020.

Zaros lives in Minnesota with his household family and one dog. Zaros plays PC games but never posts on social media about the games that he plays. However, he had a Steam[3] link on his Twitter account, which was later replaced with his YouTube channel. He does not watch furry YouTubers.

He mainly focuses on classwork, and does not often appear visible on Steam during the school year. However, he keeps creating content on his Twitter and YouTube accounts during the academic year.