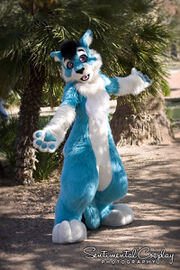 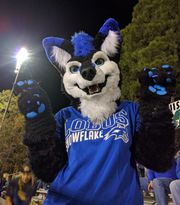 Zaro Wolf also known as Thunderhowl or Skye Cabbit (born February 15) is a fursuiter and fursuit maker who lives in Phoenix, Arizona, USA. She is the founder and owner of the fursuit studio Thunderhowl Studios. Her character is a cabbit - half cat, half rabbit - and features a sensitive moving jaw and big follow-me eyes. Her short stature and big eyes make it easy to capture hearts mostly through social media, though she still attends conventions within the United States. Though Zaro wolf is her first fursona, most know her as Skye Cabbit. Skye embodies all of Zaro's positive energy and optimism, and none of the negativity, pessimism or anxiety.

Zaro's original fursona is a black and white wolf with blue lightning bolt patterns. This character was her first character, when she joined the fandom in 2014. The suit was made into a partial fursuit in 2014 for a local furmeet. The suit was her first attempt at making a fursuit. Needless to say it didn't look great, nor did it withstand any wear and tear. A second version of Zaro was made on a Dreamvisioncreations Resin base head shortly after, which lasted much longer. This resin base head was later repaired and sold as Atlas the Arctic wolf by Redstorm Fursuits.

At Further Confusion 2017, Zaro debuted a new full fursuit, a blue cabbit character named Skye who owns and wears Skye, the blue cabbit fullsuit. From this moment on, Skye Cabbit became a phenomenon. She began making fursuiting short videos and GIFs which grew in popularity. People began to recognize the "excited" GIF or "table flip" GIF through Telegram as it spread like wildfire.[citation needed]

Skye originally worked for Redstorm Fursuits. However, in September 2018 Skye left Redstorm to work full-time for her own personal company, Thunderhowl Studios. When Thunderhowl started in 2014, it was mainly for art production and sale through Skye Cabbit. Kitkat Cabbit, maintained ownership of Redstorm Fursuits, ended up making his own new fursuit business as well called Furever Studios. After the split from Redstorm fursuits, Skye picked up Thunderhowl and made it into an LLC, then started making suits under that name and brand.