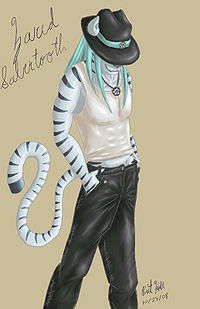 The Symbol of Zared Sabretooth

Zared Sabretooth (born September 11, 1988) is a furry fan from Rochester, New York, USA.[1] He is also known as Zared Zhangsun on Second Life.

Zared's fursona is Zared "Sabre" Sabretooth, a gay, 7 feet five inches tall Siberian tiger who weighs 600 pounds (mostly muscle). He is extremely powerful, but well-toned and built for speed. His element is lightning and his Alignment is Chaotic Neutral. Zared is usually nude or wearing a simple loin cloth. His most astonishing features are his golden eyes.

Very strong in mind, body and spirit, Sabre's only goal is to enjoy every aspect of life and help others along the way if he can. He is very loyal and extremely protective of his loved ones. His most prized possessions are the crystal (Dragon Scale) necklace and the Yin Yang around his neck.

Sabre is a kind and caring soul to those who treat him well, and a cold brutal bastard to those who wrong him. He is very intelligent but prefers the stupid act, and he is also as crazy as hell.

Among his most common companions are his son Toreg, and his pets: Hollow, Darque, MaHa, Aura, Rai, Arden, and Blake.