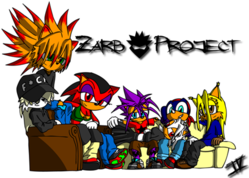 Zarb-Project is considered by some to be a fanfiction of Sonic the Hedgehog because of the drawing style.[citation needed]

On December 24th, 2007, SuperSeb declared to have gotten bored of Zarb-Project on its deviantART page, and announced that he wasn't going to work on it until further notice.