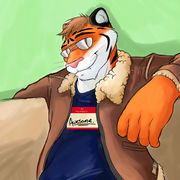 A picture of Zapnut's fursona

Zapnut Shakur is a furry whose fursona is a tiger. He is a dual national of both the United States and the United Kingdom, living, as of February 2013, in Dallas, Texas.[1]

Zapnut was one of the regular hosts of KnotCast until his departure from the regular show on October 20, 2009. Despite his long stint on Knotcast, relatively less is know about him than the other members. He tended to be the most quiet of the Knotcast podcasters, offering quips and comments but rarely detailed stories, and never ranted. He did reveal that his name came from Call Of Duty, as he selected the name "Zapnut McShootyPants" in an old Call of Duty game and decided to shorten it for his furry name. Also, he lives with Rekkie and Fuzzwolf.

Zapnut was on the staff of Furry Fiesta 2013, acting as Marketing Coordinator.[1]