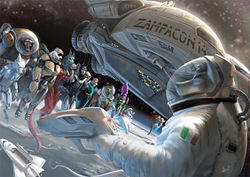 Zampacon '14: Murrs Attacks! was the third Zampacon convention. It took place from September 3 to September 7, 2014,[1] in the three-star hotel Morri Oceania in Bellaria-Igea Marina, once again on the Adriatic Riviera.

This edition reached 56 registered attendees from Italy, Greece, USA and Slovenia, 54 of which managed to be present at the con.[2] Another small group of 6 people joined the con exclusively for the fursuit games and an improvised fursuit parade.

Among the new features there's the introducion of a annual official theme which, for this edition, was chosen to be "Science-Fiction", following users' suggestions and preferences. The 2014 convention was subsequently titled "Zampacon: Murrs Attacks!", in reference to the popular comic sci-fi 1996 movie Mars Attacks!.[3]

The convention partially proposed the same activities and games as the 2013 edition while trying to better balance free time and panels. Some games like the writing[4] and the drawing[5] challanges were changed to fit the theme. The movie has been also chosen accordingly to the sci-fi theme[6] and a videogame tournament[7] was added in the first night. The beach games had to be canceled due to bad weather and on the night-out the attendees decided to improvise an unscheduled fursuit parade, which was widely appreciated, being the first one held in Italy passing through the streets of a city.[8] Other improvements from the 2013 edition have been a con-owned projection and audio system, two roll-up banners with the mascots, a longer professioanlly printed and bound conbook, glow-in-the-dark wristbands with con logo as a free gadget, the possibility for guests to sign up and use the conference room for improvised panels, volunteers acting as security and dealer's den managers[9], fursuit games, a room dedicated to the growing dealer's den, a small LAN party[10] and the fact that many activities and relevant communications had been translated in English as well, to help the foreign guests enjoying the convention.