Zampacon (Zampa means Paw, plus Convention) was Italy's first furry convention. Its first edition was held in Bologna, Italy, from December 29, 2012, to January 1, 2013. The event lasted five days and repeated annually. The most recent instance was in September 2-6, 2017, after which the convention staff decided to shut down due to work/time constraints.[1]

The con's attendance peak[citation needed] was reached in the 2015 edition "Zampacon '15: Fur Ro Dah!" with 58 registered plus a few unregistered people present at the hotel, staff included.

From its very first edition the convention, despite its size, strives to offer a place for the Italian illustrators, writers, fursuiters and gamers to express their art and passion, providing different activities, challanges and spaces for each diffrent aspect of the furry fandom, from drawing and writing challanges to fursuit games and general furry culture games, from panels on animal archetypes to furry-themed beach games and video games. Zampacon is currently the sole Italian furry convention, focusing mainly on the artistic and cultural side of the fandom while other national furmeets revolve more around partying, relaxing and being in contact with nature.

After the 2014 edition a couple of furry characters named Dante and Beatrice (from the Divine Comedy characters) were introduced as official mascots. They were created by Aledon Rex and Hologram for the convention and their species are, respectively, a Maremma Sheepdog and a Eurasian lynx (two animals that are native to Italy) dressed with the colors of the Italian flag. 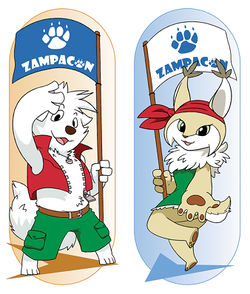 Dante (on the left) and Beatrice (on the right). Zampacon's official mascots, created and drawn by Aledon Rex and Hologram.