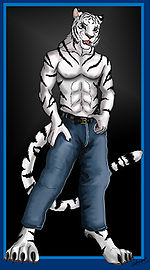 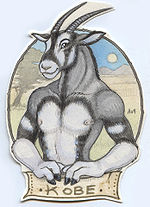 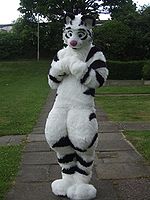 Zakari's main fursona is a white siberian tiger having a couple of distinctive V-shaped black markings, blue eyes, and a tall, muscular physique.

Zakari's alternate fursona, Kobe, represents a very different and submissive side. Kobe is a Southern Gemsbok (oryx) and is very recognizable by his shorter-than-average ribbed horns, a heart-shaped marking in his right ear, and proud chest markings.

Zakari grew up in the south of England and has been into the furry world since before he can remember. He takes regular trips to attend conventions and furmeets up and down the country.

Zakari's fursuit, depicting his main fursona, was built by WhiteyFawks and completed on May 2, 2009.