Yuuki (born February 25, 1994) is a furry artist, furry hypnotist, Convention Staffer, Convention Volunteer and Convention Speaker who lives in Pennsylvania, USA. They were introduced to the fandom in 2009 and became increasingly active in late 2012. 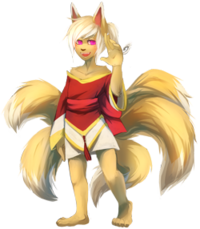 Yuuki is a 5 tailed Kitsune with gold fur and white tipped highlights, tails, and ears. They are a genderfluid and are comfortable with any pronouns from description. Their standard attire is a dress that draws inspiration from the League of Legends character, Ahri. Their eyes have two distinct colors: Gold and Amethyst, which denote either docile or mischievous behavior. Despite this, Yuuki's personality is generally aloof and friendly.

Yuuki underwent some small cosmetic changes in early 2015, replacing their kimono-inspired dress with capri jeans, a button down sakura shirt, and white lab coat. Their hair was also changed to flow down their back with pigtails tied using small bells. They also were redesigned wearing glasses. They released their 2015 design at Biggest Little Fur Con 2015. They officially renamed their fursona to Yuukari I. Shishome with the release of the design.

In a statement on their FurAffinity journal, they mentioned why they wanted to redesign their fursona. [1] 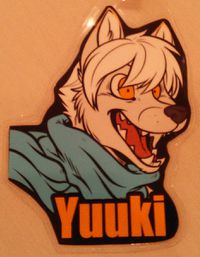 Yuuki's fursona used to be an Arctic fox named R. Yuukari Shishome, or Yuuki chan, with cream-tipped ears and tail. He had golden eyes that often confused people into thinking he was a wolf.

Yuuki is a frequent visitor to the Furnet IRC. He can also be found on Fur Affinity as Y, Weasyl, and Twitter under the handle @fluffsune.

Yuuki has attended the following furry conventions and meets:

Yuuki was Volunteer staff member at FA: United Beginning in 2014 and plans on returning for following years. Yuuki worked beside the volunteer coordinator, Kobura (2014), and handled everything and anything that needed to be done and didn't have someone to do it. Yuuki generally volunteers their entire convention time to such endeavors.

Thoughts on conventions and the fandom[edit]

Following Yuuki's first convention in 2013, he made a public statement regarding conventions and the fandom.[2] 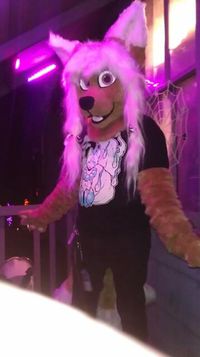 Yuuki Partial Suit by Yonoa of The Fuzz Factory in October, 2015.

On October 17th, 2015; Yuuki debut their first partial fursuit of the character, Yuukari. It was debuted locally in Pennsylvania during an Eastern Fur Meet's Halloween Party and will be further debuted at Furpocalypse 2015. The fursuit was made by Yonoa of The Fuzz Factory.