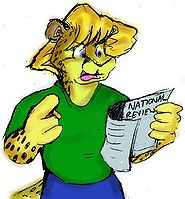 Artisan Patrick Sunspot (Arty) is a fictional character and one of the two main characters of the webcomic Vinci & Arty, as well as occasional cameo appearances in A Doemain of Our Own. He is a Yumar, a fictional aquatic-based feline characterized by yellowish fur and black spots. Often highly charismatic and a bit flamboyant, his exploits are often mischievous and sometimes land him in trouble. Before attending college, he was known for his lack of anger management until a friend set him in the right path. While his middle name is Patrick, he sometimes tries to claim his middle name is otherwise, i.e. Precious, Perfection, or Pretty. Arty is a devout Christian and highly devoted to his partner Vinci. He is openly gay, a fact that has distressed Vinci in the past. Arty works as a computer tech support operator, a job that gives him great frustration at times, yet allows him to be openly snarky to his customers.

Arty is also the host of Ask Arty, an Internet radio program started in November 2005, broadcasted every Wednesday through the LT3M website. The show is offline due to scheduling matters, but has not been abandoned wholly.

Arty's mother is named Nalya and he also has a younger sister named Kelpsing (Kelly).

Artisan P. Sunspot (Arty), a major character from the online comic Vinci & Arty and host of the weekly Internet Radio program Ask Arty is a yumar.

Yumars are a genetic heterosis between three distinct species:

The genetic cross result is an aquatic-based, biped feline being, characterized by (generally) yellowish fur with black spots, webbed paws and feet, and a furred feline-line tail that ends on a koi patterned, fur-less fin.

Due to Mutagenesis, yumars are prone to biological deformities, which over time, have evolved on some diverse characteristics that can be as minor as the badger fur patterned yumar, to a completely different subspecies, like the harmony yumar. Harmonies are named so for their forked tails that split into two about a fourth out from the body.

Fubars are a rare hybrid offshoot that are the result of crossbreeding between yumars and foxes (Vulpes vulpes).