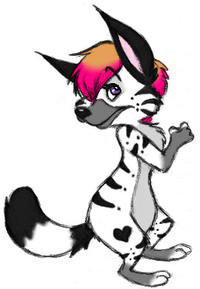 Yuchi, now currently MochiMink (born February 12, 1989) is a furry artist and fursuiter from Florida, U.S.A. Her fursona is a prehistoric hyena/raccoon hybrid. More specifically, she is an ictitherium with a little bit of crab-eating raccoon mixed in. (Ictitherium are an extinct genus of hyena. The 1.20m (4 ft) long creature looked more like a civet than a hyena, possessing a long body with short legs.) The character herself believes she is a ferret and acts like such. Her fursona has undergone a change and is now a mink/ferret hybrid.

Yuchi has been in the fandom since late 2006. She discovered furry in her freshman year of high school and slowly developed a keen interest for it as she grew up and found out more about herself.

As a fursuiter, Yuchi can be found parading around conventions for hours on end. She has attended Mephit FurMeet, Elliott's Live Events, and Anthrocon, as well as the anime conventions Metrocon and AFO (Anime Festival Orlando).

Aside from art and the fandom, ferrets are Yuchi's greatest passion. She is a ferret photographer and artist, doing art for various shelters and photographing either her own or other people's ferrets.