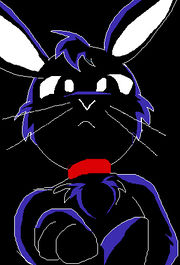 He started as an artist drawing dinosaurs back in 1984. Later, in 1988 he begins to draw Humans when the anime boom Knights of the Zodiac appears, this will influence his next works as in the middle school he learns how to use watercolors and acrylics. This leads him to be a self-taught person.

Year 2002, a community called Furry Latino appears and he enters with the nickname Snipergosht. There his Paint drawings call the attention of the fandom.

Later and with the uprising of Furry Latino 2 he decides to change his nickname to Yifferman and his first characters appears.

In 2004 he enters to DeviantArt as YifferGemini. His first comic there will have 10 strips and later, with the experience gained he will move on to a bigger project: YifferHill.

His style is clearly based on the designs of the characters of Saint Seiya, the Mavericks of Megaman and the series of Mazinger-Z.

With 50 strips this comic with comedy and horror seems to be a spin-off from "Silent Hill" with some guest artists such as Alone-fox, El Zorro Rojo, Mini-feru, Denryuu, Sakary, Lune Cheetah, Ahumeniy and his own character Mr.Zero.