From WikiFur, the furry encyclopedia.
Jump to: navigation, search
Culture > Videos > Yiff This!

Yiff This! was a website designed to debut post-produced m/m adult furry videos recorded within Second Life. The site was created by Fuzzy in 2009, as a reaction to his perception of the low quality of Second Life videos online.

In December 2010, Fuzzy announced, "I regret to inform,esp. new visitors, that this site will go down Dec 21st 2010 with no promise if/when it will return." 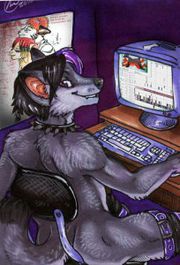 Fuzzy communicated to site fans and visitors through the character Cresil The Wolf, who was created specifically to be the website's mascot/icon. Cresil is also featured in several videos.

Fuzzy produced the videos for free. Videos were filmed and posted about a couple times a month with other volunteer furries. The selection method was mainly a guideline based email-in volunteering competition followed by private approval and blind-date style matching.

Filmed volunteers were placed in the Hall of Volunteers area of the website. In addition to the videos there are also Second Life images posted below them.

Yiff This! had an RSS feed as well as a Second Life group called Full-time Furverts that peaked about 500 members before being closed.

Fuzzy bought the domain years before turning it into a Second Life adult video site. According to the Internet Archive Wayback Machine, the previous owners used it as a laid-back anti-furry'esque comedy article site. [1]