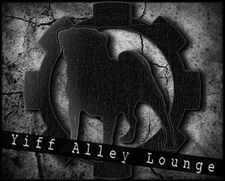 Founded in March 2012 Yiff Alley Lounge has been on the mission to bring the furry community of Second Life a high level of quality and standards found no where else on the grid. Owners Victoria Loveless and Lina Pussycat are committed to bring only the best and current items available as well as promoting an openly friendly non biased place to meet and mingle with fellow furs and fur lovers.

While the lounge is an adult oriented establishment, it is more than just another yiffing spot. We focus on being a community and social hangout with a fun light hearted bond that makes the lounge feel like home, thus our motto: “Home of the Misfits.”

The concept of Yiff Alley Lounge came together in early 2012 when both long term SL residents and partners Victoria Loveless and Lina Pussycat began contemplating starting a small self sufficient furry hangout together. The vision was to create an urban stylized lounge and yiff area focused on providing a better quality environment without pestering patrons with a commercial presence via malls and ad boards.

Since it's opening Yiff Alley Lounge has gone through four major builds.