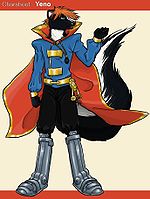 Yeno (born 1987 in Steyr, Austria) is a musician (mainly singer) and writer from Vienna, Austria. He is part of the German furry fandom.

History with the Furry Fandom[edit]

Yeno grew up with a father being a computer geek. So he got his hands on a computer rather soon. Already being a fan of anthropomorphic characters in cartoons and video games, Yeno saw his first Furry Art in 1998, which also was the year he first came in contact with the Fandom. Although he wasn't active and just visited a few sites back then. Later, in between 2001 and 2003, the German furry FoxMcCloud brought him from RP in contact with the German furry forum Furbase and the furry radio Furry 8000. In 2001, Yeno fully and actively joined the furry fandom as "Sakurawolf", first only in IRC, though.

In the 6 years Yeno was part of the Furry Fandom, he already served as moderator for a few boards and IRC-Channels on IRC, FurNet. He also wrote a few stories in German language and DJed in a few furry clubs on Second Life.

Yeno's character, Yeno Perun, is a male anthropomorphic hooded skunk. He has a slim body with red hair and the eyes are emerald green. Yeno only has one stripe, being a hooded skunk, which goes from nose over face, head and back to his tailtip. He has a white-furred front side, as well. Also there is a silver nosering on the left side of the nose and a black dragon scale on a leather band as necklace. Clothing is actually not defined, so he mainly uses outfits from game/cartoon/etc-characters he adores. As Yeno's player has a big affinity towards Science Fiction and space he normally, if not clothed with already said characters' outfits, prefers being shown in a Sci Fi outfit.

Yeno also has other characters, used for RP or stories. One of these is Spade, a red fox.