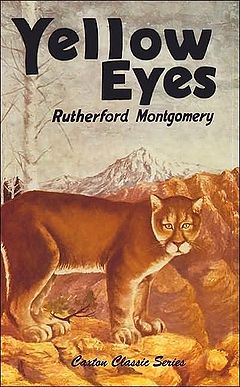 Yellow Eyes by Rutherford Montgomery tells the story of a young cougar cub orphaned in the mountains. His siblings are killed by the hunter Cougar George and his pack of dogs. Yellow Eyes grows to adulthood and learns to avoid the hunters, escape traps, fight off hunter's dogs, and eventually takes a mate, the Golden One.

Rutherford Montgomery wrote more than 50 books about the animals, culture, and landscape of the American West. Some of his other books include Gray Wolf, Broken Fang, Carcajou, Husky, and Wapiti.