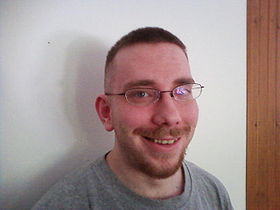 Yaro in his home.

Yaro is the head wizard and lead programmer of Whispers of the Galaxy. He is also a programmer on Hidden Nirvana MUCK and The Pridelands Chronicles.

Yaro is a member of many games, past and present, including Meadows MUCK, The Pridelands Chronicles, Hidden Nirvana MUCK, and Chimaera. He used to play on Endless Round, Kings and Vagabonds, and Devil's Orchard, and made an attempt at launching his own game before Whispers, called 0-Singularity.

Yaro is the President and CEO of his unofficial company, Causeway Products Group, a company which emphasizes open-source solutions. Its four divisions are Causeway Software (open-source software that is not entertainment in nature), Ameoba Entertainment (open-source entertainment software and other sources of entertainment), Caldwell Technologies (custom-built computers), and Heartbeat Communications (Internet-hosting for web sites and MU*s). Most of the divisions have not begun to operate, as there are few true employees.

Yaro is the creator of a few original universes and ideas of stories. Whispers of the Galaxy, a far future in which humanity has fled the galaxy and the galaxy is colonized by anthropomorphs attempting to rebuild from a war of survival. Project: Prodigy, another future, more closely set to our time, wherein Earth has unified after launching space colonies following overpopulation, turning into a civil war and a secretive joint project to construct a superhuman. And finally, the Chronicles of Otai, a post-apocalyptic Earth wherein the world has retreated underground in the face of their creations, the Caton race, regular humans enhanced by animals for military purposes.

All these themes feature a future wherein humans devise their own method of destruction in a genetically constructed being or beings, with varying degrees of extinction.

Yaro is an enthusiast programmer, writer, and roleplayer hailing from Nebraska.

Yaro, as a character, is a meerkat.