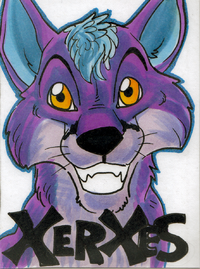 Xerxes Qados (ZERK-seez KAY-dose, IPA ['zɜrk siːz] ['keɪ doʊs]); IRL Zacqary Adam Green), is a filmmaker and fursuiter with a purple fox fursona. He has been a furry and an active member of the Long Island Furs since 2006, and regularly attends Anthrocon and FurFright.

He was the community relations manager at MyFursona from September 2007 to May 2009.

Xerxes' fox fursona has purple fur, short blue headfur, and a light lavender muzzle and stomach. He is usually depicted wearing bright yellow UFO-brand pants. His identity is interchangeable with that of his player, and is used as a straightforward avatar; Xerxes predominantly refers to his character in the first person. 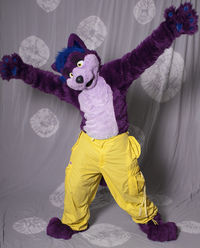 Xerxes' first fursuit, modeled after his fursona, was constructed by Lacy. In 2016, Made Fur You built his 2nd one of the same character. His performance style is bouncy and hyper, exclusively non-verbal, and physically comedic. He often exaggerates his clumsiness for laughs, and to compensate for the limited visibility in his fursuit head while wearing fogged-up glasses.

Xerxes was born February 8th, 1990, on Long Island, New York and moved to New Orleans, Louisiana in 2017, where he currently lives. His non-furry name, Zacqary Adam Green, is legally "Zachary," but spelled differently in his public web presences to make his name, as he claims, "more Googleable."

Prior to joining the fandom, Xerxes' primary avatar was "Plankhead," a man in a business suit with a slab of wood instead of a normal head. Since more fully identifying himself with his fursona, Xerxes has repurposed the Plankhead name as the company under which he releases his film and video work. As can be seen on the Plankhead website, "Zacqary Adam Green" makes no effort to publicly separate himself from "Xerxes Qados;" he is, by contrast, forthcoming about the fact that he is a purple fox "in [his] spare time."

The Plankhead label is used on some of Xerxes' work of furry interest, such as his short film "Goliath", which was submitted to FurAffinity due to its anthropomorphic characters[1].

Xerxes is a Free Culture and file sharing activist. While much of his work is licensed under Creative Commons, he donates some to the public domain; e.g, his widely-publicized protest video "Hitler reacts to the Hitler parodies being removed from YouTube".