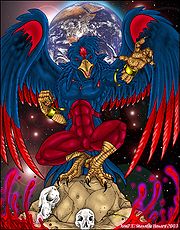 Normally protector of life and creation, Xenif's soul was corrupted by the sorrow and anger in the soul of his forefather. Normally only one phoenix can exist in creation at any given time, when they die they are reborn but slightly different in personality than the one before them. His forefather had fallen in love with a mortal but when her time had come and she passed away, he was so stricken with sorrow that he lashed out in anger at all around him. Jealous that mortals could live out their lives with their loved ones, while he was doomed to see the ones he loved die before him.

His rage was ended by the unicorn knight Unicor the first. In his dying breath he returned to the body of his dead love and split his essence into two. He hoped that when the resurrection flame would come, it would ignite her body and she would be reborn. He then died and sure enough, the flames divided and created two new beings in new eggs and thus the first female phoenix was born. But the rules of nature still applied, only one phoenix could exist in one plane of existence at a time, so one egg was transported away to another dimension and one remained.

What the previous phoenix did not know that not only did he divide his essence he also separated the emotions of his soul. Phenix was born light hearted and carefree, while Xenif was born with the sorrow and rage that had tainted its soul. Now Xenif seeks out his other half to reunite with her, his soul mate and eternal love. Unfortunately, nothing had better stand in the way of this goal.