Xalelydo Nightstride (also known as Xale) is a hybrid Leofox (half fox, half lion) whom is originally from Celina, OH in the U.S.A., but now resides in Los Angeles, CA. He is an avid musician and performer along with being a fun loving fursuiter. 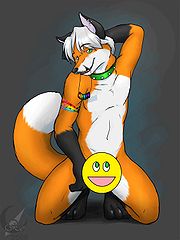 Over the past twelve years, Xale has metamorphosed into the Hybrid Liox he is today. His first fursona was a gold adolescent lion with a silver mane named Nightstride. He developed this character after first seeing Disney's The Lion King. After he found the fandom in 2000, he kept this fursona for two years before he began to shift to a new Fursona.

After he graduated high school, the now-a-days Xale began to once again change as a person. Tired of the way he had been living, he began to incorporate his two fursonas together to create a new Fursona, one that more represented himself. After about a month of work and thinking things over, he came up with Xalelydo Nightstride, a hybrid Liox with a silver adolescent mane, fox looks, lion ears and claws (five forepaw digits though so he can play piano/bassoon), and glowing green eyes that represent his own real eyes. Proud of being gay, he wears the same earrings and necklace along with collar in everyday life to link himself to Xale. Though he loves to wear them every day, Xale usually only wears his pride earrings out in public these days. Friends and family know, and if anyone else questions him, he is always open and honest with them.

Xale's (partial) fursuit was built in 2008 by Niiku, a Unimule Pony whom lives in the Greater Detroit area of MI. It was premiered at MFF 2008, and had great acceptance amongst everyone whom he met. Niiku looked at him, upon him picking it up and first wearing it with her around, stating: "Oh my god, I just built a fox. Can anyone say this is limited edition?" as a sick but true joke about Foxes and Xale himself. They are best friends, so everyone there had a good laugh and thus Xale's new and perfect fursuit was born.

The Body of the suit was actually built by Xale's own mother. The hind paws were constructed by the ever talented HyenaGirl at HyenaGirl Studios, whilst the tail, hand paws, arm sleeves (for the partial) and head were created by Niiku at "A Fursuit Is Fine, Too" Productions. 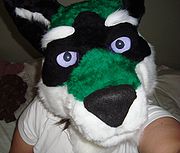 In addition to Xale owning his primary character's suit, he also owns a partial suit of his aternate character, Keowee. Keowee is a huscoon (husky/coon hybrid) and was made by Eris Valgen, a folf from Tulsa, OK. She also made his Xale's mate Demara's fursuit head, which he ended up re-doing the eyes on for vision improvement. Keowee's head and tail were made by eris, while he made the handpaws, and a set of arm sleeves, and simply uses a set of "Happy Feet" slippers for the feet, since they are oversized looking shoe-sliipers, and work out nicely with fursuits.

Xale has been going to cons since 03 and loves to hang out and fursuit, owning one of his own currently, and one on the way to match his actual Fursona. His favorite cons to attend are Califur, Further Confusion, Furry Connect North; and Midwest Furfest is by far his favorite due to its size and proximity to himself.

He is not much of an artist outside of the music realm, however he does draw (though no one ever sees). His true talents lie in composition and performance, along with some minor acting on the sides.