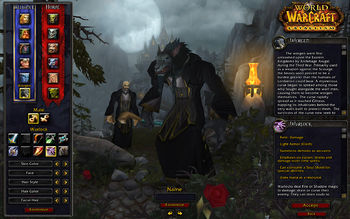 The Worgen are a race of werewolves from the MMORPG World of Warcraft. They became playable on 7 December 2010, with the release of the Cataclysm expansion. Playable Worgen are natives of the until-recently isolated nation of Gilneas who were infected by a form of lycanthropy. They are now members of the Alliance. When out of combat, Worgen can switch between human and anthropomorphic wolf forms.

Worgen directly reference furry fandom in one of their jokes (played after entering the /silly command):

Pre-Cataclysm Worgen were monsters hostile to both the Alliance and the Horde. They were believed to come from a horrible parallel dimension. Worgens were summoned on several occasion to fight invaders, but in all instances they managed to break free of control. By transmitting the "Worgen's curse" via bite they were able to greatly expand their numbers.

The human nation of Gilneas was self-isolated from the world by a giant wall, but they had no protection from the Worgen plague. By the time of the Cataclysm, most citizens of Gilneas were infected by the curse. A special treatment allowed them to retain their human personality and to shapechange into human form.

When the Cataclysm struck, Gilneas became vulnerable to the Forsaken's attack. The undead were relentless in their search for the Scythe of Elune, the artifact that Gilneas swore to protect. Soon the nation had to evacuate from their ancient homelands to Night Elves' hospitality. Elves revealed that the Worgen descended from ancient Elven druids who followed the way of the Wolf. The wolf-druids became too close to the bestial side and had to be contained in the Emerald Dream, a mystical parallel dimension.