Floppity is a webcomic by Kat Smith It centers around a bunny named Combo whose left ear is notably smaller than the right. The comic has undergone changes since it started back in 2006 on Comic Genesis hosting. It has since moved over to Xepher.net where it is to stay for the foreseeable future. The comic is now story-driven and in colour.

Combo, a bunny, and his chibi clone traverse across dimensions after coming across a time-splitting vortex. They must find their way back to home before they're lost forever, and uncover the secrets behind the vortex itself.

There is also another character named Woo the Raccoon who is perpetually on the hunt for food. He too jumped into the vortex and has appeared as Tom Nook from Animal Crossing as well as Mario's Tanooki Suit, although he has no relation to a tanuki.

There is often banter between Combo and the comic's narrator. There is also a re-occuring theme of parody of popular culture, including allusions to popular furry webcomics and characters. 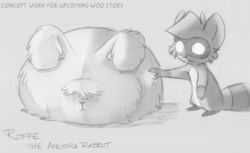