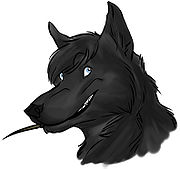 Wolfsangel Slade is a male, bisexual, Christian furry from Houston, Texas, where he currently attends the Lone Star college, majoring in psychology. Often found on IRC, wolfsangel can be seen in the texasfurs, fursuit, and anthropod channels. An avid supporter of animal welfare groups such as Rexano, he is strongly against animal rights groups such as PeTA.

Wolfsangel graduated from Sweetwater Christian School in a class of nine, two of which are fur friendly. Wolfsangel became aware of the term furry, and declared himself as one at the age of fourteen, after watching the CSI episode Fur and Loathing. Oddly enough, he was also planning to go into forensics as a lab technician at the time. During his second conference for Forensics in Florida, he met and ultimately brought another forensic bound student into the fandom as well as her boyfriend at the time.

Wolfsangel Slade is also a novice writer. His first major piece, OPERATION W.O.L.F.S.A.N.G.E.L., which started in June of 2007. Due to college, Wolfsangel has been suffering from writers block, though plans to start a new chapter within a years time. Wolfsangel also enjoys inking and/or painting the occasional piece, with permission, from his favorite artists.

Wolfsangel also began to work in ceramics during the fall season of 2009, as part of his college course. His work there has mainly focused on a form of Japaneses pottery known as raku, at which he has excelled so far as to impress the teachers and live in artist at the studio where he attends. Another form of pottery at which he seams to have excelled in his wheel turned pottery, known as "throwing". Only after having a teacher explain, he was able to throw a hallow sealed lidded container, on his second time on the potters wheel.

Wolfsangel has fursuited once during his high school days, as Clifford, the big red dog. This was almost a year after he found out he was furry, and surprised him to be offered. Since that time, wolfsangel has wanted to continue to fursuit, but has had little chance. In the summer of 2009, Wolfsangel's grandmother passed on a old Montgomery Ward sewing machine, that still works.

In 2011, July, Wolfsangel finished his fursuit while at Anthrocon2011. Making final touches only a night before his first walk in his fursuit, in the Anthrocon Fursuit Parade. 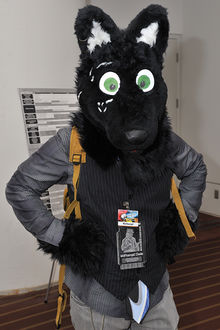 Now an avid fursuiter, Wolfsangel can be seen more often running around conventions in fursuit.