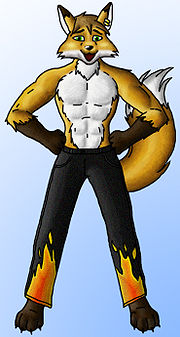 Wolfie Fox is a 6ft tall red British anthropomorphic fox with all the generic markings you would expect a fox to have. Wolfie found the furry community back in 2002 while searching the Internet for the game Dune 2000 and came across an anthropomorphic character named "Dune". After further investigation he discovered a furry role-playing site called Alpha City which took place on IRC.

Wolfie most commonly refers to himself as an "innocent fox". He is a member of staff at the UK furry convention ConFuzzled starting in 2008 managing the art room and dealers den, then in 2009 managing the fursuit lounge and in 2010 managing the main stage with his close friend LevLion.

Wolfie Fox' attended his first furmeet in Manchester on November 2003, attending the Sheffield furmeet the next month. He attended more furmeets throughout 2004 and 2005 and went to his first furcon in the same year, Anthrocon 2005.

Towards the end of June 2005 Wolfie got into Second Life under the name of Wolfie Waves and became heavily involved in the Stargate community within Second Life. Over the course of time Wolfie learnt how to build and script items in SL with the aid of his artistic skills, he made many things that were Stargate related such as a Dial-Home Device and Naquadah Generator; Wolfie ended up setting up his own Second Life business called OS Labs.

Wolfie still creates many Stargate related items on SL and is also one of the creators of the Alteran Stargate Network, now the biggest and best fully working Stargate network in Second Life.

Wolfie created an alternate account on Second Life called Wolfie Gaffer whom he mainly created for terraforming purposes but ended up also turning into a fun new furry character for himself. Wolfie Gaffer is a gaffer tape obsessed silver fox.

Wolfie also helps his friend Peter Lameth with running the Eternal Calm Estate which used to consist of 4 regions.