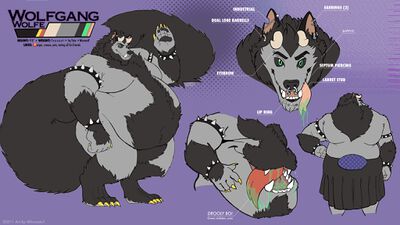 Wolfgang's fursona is fat, 9-foot-tall anthro wolf that resembles a sort of monster werewolf with green eyes and black sclera. His fur is grey and black, with longer black hair in an hourglass shape on his chest and belly, covering his shorter grey fur. He has a black mohawk, a large nose piercing, and two horns reminiscent of Bowser from the Mario franchise. He has an incredibly long fluffy black tail, despite his werewolf appearance. He also wears two pairs of spiked black bands around his arms and wrists, and can sometimes be seen in a kilt.

Wolfgang can use his belly maw to consume large prey, a useful skill as he is a voraphile. Much of his artwork, done as simple black and white line drawings, depicts fatfurs, with frequent vore images.

Although not a full fursuiter, Wolfgang has been known to wear a wolf tail and fangs or cosplay his favorite big-bellied characters.

Wolfgang is a full time YouTuber and Twitch streamer on the channel HowlingGoodGames.