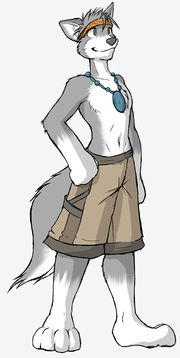 Wolf Pup TK, also known as Wolf Pup or just TK, is a fursuiter and furry dancer who lives in the San Francisco Bay Area in California, USA.

Wolf Pup is a member of FURReal fursuiter dance crew. He was a Guests of Honor at Biggest Little Fur Con 2013.[1]

TK has been active online in various furry communities since approximately 2001, but did not begin attending furcons until FC 2010. His fursuit debuted at MFF 2010.

Wolf's fursona is a grey wolf, distinguished by his headband, necklace, floppy hand-paws, and shorts (only in artwork).

TK was interviewed by Sara Underwood for a G4's Attack of the Show! video, Furry Weekend Atlanta with Sara Underwood. He was also featured in a Kotaku article for one of his Furs For Life videos, A dude in a fursuit. Dancing. For charity.