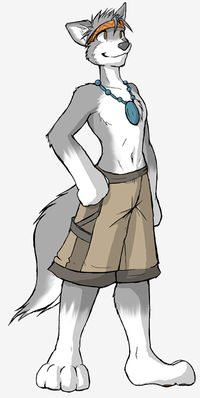 Wolf Pup TK (aka Wolf Pup or TK) is a fursuiter who lives in the San Francisco Bay Area in California, USA. His fursona is a grey wolf, distinguished by his headband, necklace, floppy hand-paws, and (in drawings) shorts.

TK has been active online in various furry communities since approximately 2001, but did not begin attending furcons until Further Confusion 2010. His fursuit debuted at Midwest FurFest 2010.

Wolf Pup was one of the Guests of Honor at the Biggest Little Fur Con 2013.[1] He is a member of FURReal fursuiter dance crew.

TK has made two appearances in the media. TK was interviewed by Sara Underwood for a G4 video, Furry Weekend Atlanta with Sara Underwood. He was also featured in a Kotaku article for one of his Furs For Life videos; A dude in a fursuit. Dancing. For charity.

The group of Wolf Pup TK, Kiva Kangaroo, Bucker Fuskyote, Trixie the Skunk, Kazuki the Folf, and off-stage Leisha and Forneus won 2nd place in FC: Unleashed with "Everyone's a Little Bit Furry". It and other videos include: