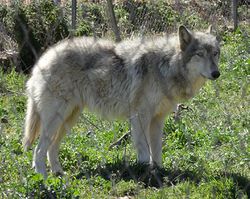 Photo of a Wolfdog

Wolfdog, also known as Wolf Dog, is an informal name for a wolf and a domestic dog hybrid (Wolfsky or Wusky when it involves an arctic breed such as the husky). A wolf-dog hybrid between a wolf and a malamute, is called a Wolamute or a Malawolf. Wolves have also been bred with German Shepherds, but in some cases, like in the furry fandom are crossed with other breeds.

Balto, the title character in the Amblimation animated film of the same name, is an example of a wolfdog.