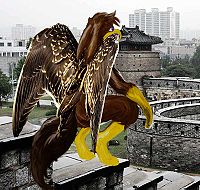 A wing is a body part which acts as an aerofoil, typically allowing its owner to fly, although the wings on some characters are strictly decorational. Wings typically come in pairs, one each for the left and right side of the body. 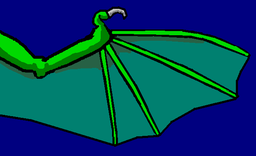 A bat-like wing consists of a modified foreleg supporting a membrane, as in bats. The membrane is supported by elongated 'fingers', which can bend to alter the wing geometry. In bats, the thumb is still present as a hook-like claw at the top of the wing, which is used to grip surfaces.

Dragons tend to use a very similar style of wing, in some cases with the same kind of thumbclaw.

Feathered wings are those seen on birds. Typically these wings give a character an angelic appearance. The feathers are attached to a muscular, reduced forelimb, which lacks all digits except for the 'thumb', which holds a clump of feathers called the alula to reduce stalling in low speed flight. 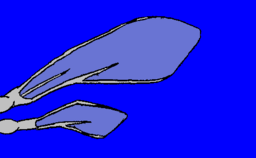 Insect wings are those seen on insects: typically those of flies, bees, wasps, and beetles, which are traditionally oval in shape, translucent, flat, and have a pattern of wrinkles. Fairies are commonly depicted with this kind of wing.

Unlike bat and bird wings, it is not uncommon to have two pairs of insect wings at once.

These can be classed as insect wings; however, they are often strikingly coloured and shaped, in butterflies. Moth wings are more stealthy, and covered in soft, noise-damping, camouflaged scales.

Although seen on few if any furs, this is a style of wing seen in fossils of pterosaurs, an extinct family of flying reptile descendants. Resembling the bat wing, but unlike bat wings, pterosaurs usually only have one long digit holding the triangular membrane, in many cases small claws are found where the bat's single claw is, usually accompanied with atrophied digits for each claw.