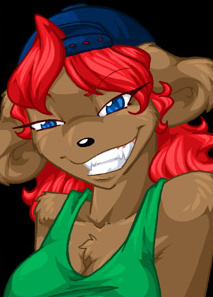 Wildy-San (Better known as Wildy) is an anthropomorphic ferret, and one of the primary characters from the webcomic Dan and Mab's Furry Adventures.

In the early stages of the comic, she started out as a tomboy, but developed into a more devious character. Also during her development, Wildy gained a red raccoon-like tail.

She has been involved in plots from whipping Daniel for making himself over-available, to controlling Lost Lake and forcing the other denizens to watch "Beverly Hills 90210". Wildy has also caused mayhem by writing risque novels about her friends, becoming a mystic shaman (and tricking Dan to letting her accompany him on his adventures against Dark Pegasus), and answering a door to priests — topless.

Wildy-San has a single brother, Biggs-San, who runs twink territories. They have an ongoing sibling rivalry between them, though it is lightened by humor; an ongoing traditon on Wildy's birthday is for her to send Lorenda down to twink territories in order to either extract gift money out of Biggs, or eat him if he refuses.

The character for DMFA was adapted from one of Amber's friends, whose player name is also Wildy-San. Wildy's player still reads the comic and posts on the DMFA forums.

There are some slight differences between the character and the inspiration; for starters, the real Wildy is less evil.