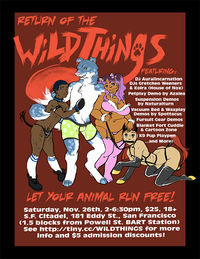 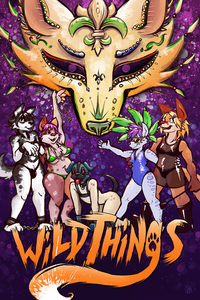 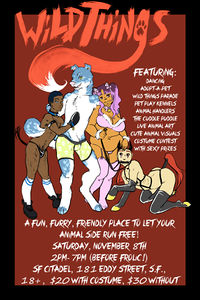 In 2014, a volunteer for SF Citadel approached several event organizers in the local furry community about the idea of creating a regular event for furries, petplayers, puppy players, ponyplayers, and other anthropomorphic and primal-themed players. The goal was to attract many in the furry community, by organizing a regular event before Frolic, with a goal of using SF Citadel as a safe place not only for yiffing and consensual adult activities in the main dungeon -- some of which was already occurring outside of Frolic -- but also as a way of providing an enjoyable social space separate from the dungeon, where attendees could romp, play, dance, cuddle, view furry art and interact with live artists, see and actively participate in demos of various forms of petplay, bondage, suspensions, etc.

Most of the original volunteers and organizers of Wild Things were from the furry community, and on Nov. 8, 2014, about 120 people attended the first Wild Things. Slightly more than half of those attending were in the furry community, with many from the larger LGBTQ community. The event's reviews were overwhelmingly positive, even from introverts and people who had never been to an adult playspace before.

Wild Things 2 was April 12, 2015.[1] after the second Wild Things, there were a series of scheduling conflicts with SF Citadel, which threatened the longterm existence of Wild Things and left the event in limbo. This changed in late 2016, when there was more of a call within the SF Citadel for having another furry-friendly petplay event. Discussions with SF Citadel were very positive, and a third Wild Things (Wild Things 3) was announced, taking place on Nov. 26th, 2016, along with the intention of making Wild Things a regular, recurring quarterly event at SF Citadel. Despite being held on a rainy day after a major holiday, attendance was at approximately 160 attendees, easily the largest of any of their prior events. They also announced a Mardi Gras themed event on Saturday, Feb. 25th, 2017.[2] Another event was scheduled for Saturday, November 25, 2017.[3]