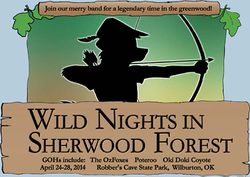 Wild Nights 2014 was the sixth annual Wild Nights convention, and took place over April 24-28 at Robbers Cave State Park, Oklahoma. The convention's theme was "Wild Nights in Sherwood Forest".[1] There were 222 attendees.

The Guests of Honor for 2014 were Potoroo (head of the outdoor convention Feral! in Canada and a talented musician) and the Carspeckens (creators of the OzFoxes series). The fursuit performer Guest of Honor was Oki Doki Coyote.[1]

Wild Nights 2014 inspired a news article in This Land Magazine entitled Wild Life authored by journalist Jezy J. Gray. The article was the cover article for the September 2014 issue of This Land. Fursuiters Cassandrus Blackclaw and De'sir were featured on the front cover and Cassandrus, De'sir, and Candie Foxalure are featured in photographs on the inside of the magazine. Within the article, Heros the Noisy Panther, Candie Foxalure, Greyhare, and an unknown fur are interviewed. References are also made to the Anthropomorphic Research Project.[2]