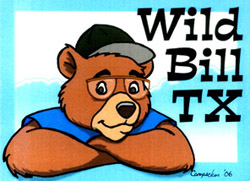 Wild`Bill`TX (or Wild Bill TX), real name Billy Glenn Spradlin (November 25, 1961 - September 8, 2021) was a greymuzzle furry who lived in east Texas, United States. His fursona was a domesticated brown bear, wearing glasses, ballcap, t-shirt, bluejeans and sneakers. He got his nickname from friends during his high school years in the late 1970s, and used it on Quantum Link, BBS Systems and later IRC in the mid 1990s.

Wild`Bill`TX spent his childhood in Goleta (near Santa Barbara), California watching classic 1960s cartoons on television, including those from Hanna-Barbera, Looney Tunes, MGM and Disney along with listening to lots of AM Top 40 radio as a kid. He also read Harvey and Gold Key Comics (especially loving the stories of "Duckman" Carl Barks, the creator of Uncle Scrooge) during the 1960s and early 1970s. He fondly remembered seeing The Jungle Book and Robin Hood in the theater during their original release, and visited Disneyland many times, before he moved with his family to Oklahoma in 1974.

He started collecting furry comics (when they were known as "Funny Animal" comics) in the mid 1980s, but fell out of collecting them when his family moved to East Texas and found out the local comic book stores only carried superheros.

Wild`Bill`TX discovered the furry fandom in July 2003, when he stumbled upon various anthropomorphic comics (including Newshounds, Class Menagerie, and Suburban Jungle) on Keenspot. From a link on the Class Menagerie comic, he discovered the Funday PawPet Show, becoming a fan and regularly joining the PawPet IRC chat server during shows.

In 2006, Wild`Bill`TX attended his first furry convention (Megaplex 5), and has since been to several others including Furry Fiesta, Anthrocon, Mephit Furmeet, Furry Weekend Atlanta, Megaplex, Rocket City Fur Meet and Furry Connection North. He worked in commercial radio for 18 years as a DJ in small and medium radio markets and is an avid vinyl record, CD and tape collector. WBTX loves 1950s-1960s Oldies, Classic Rock, Soul R&B and Power pop music.

Wild Bill was perhaps best known for his photography and videography at the numerous conventions and other furry events he has attended. He has uploaded thousands of photographs and more than 200 videos. His frequent presence in the front row filming these events inspired Rhubarb the Bear to write a song about him.

Wild Bill passed away in his sleep on Sept. 8, 2021.[2] He had posted in the days prior to his death that a flu had ruined his trip to MFM (which he did not attend). Bill's brother Andy later posted that the cause of death was a heart attack.[3]