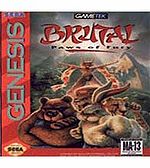 Brutal: Paws of Fury was a fighting game containing anthropomorphic characters published by GameTek in 1994. It was published for the Genesis, PC, Sega CD, and SNES. An enhanced version, Brutal Unleased, was made for the Sega 32X in 1995; in 2002, a fan remake, Brutal Remix, was released.

The Brutal storyline was typically banal for its time: Under the watchful eyes of the malicious Dali Lama, twelve (and later fourteen) fighters came to the simply-named Brutal Island to battle for fame, prize money, and recognition.