From WikiFur, the furry encyclopedia.
Jump to: navigation, search
WikiFur > Sandbox
This is the Sandbox. Please feel free to play with editing features here, but don't remove this line. Thank you! You might also want to check out the help.

TFFG was founded on Discord on 18th of July 2019 by the first President (Lider) of the Government of The Furry Fandom with the philosophical abstract goal of improving Furry Fandom. Since then, TFFG has steadily evolved. In its early stages, TFFG focused on its own social media presence as a loose association of a few Furries, the administration of the government worked mainly sporadically and members were able to contribute without bureaucracy.

TFFG first reached wider attention through a mention of the popular American Furry BetaEtaDelota on YouTube.

TFFG was fully democratized under Interior Minister and later Chancellor Nylo El Lobo. In cooperation with President Lider, Foreign Minister Draco Alzrentu and then Chancellor Turnip, he presented a draft constitution for the government of Furry Fandom, which was later officially confirmed.

TFFG is a direct democracy. For this reason, it does not have a parliament.

The consitution of the Furry Fandom Government can be found on their Discord server. Visitors can accept the constitution there and become citizens of the government. Because of its role-playing nature, the Constitution applies only to those citizens who have voluntarily accepted it and has only symbolic scope for the entire fandom. The equality of all furries and all species of fandom is written into the Constitution, as is the operation of government.

President: According to the Constitution, the President of the Government of Furry Fandom shall be considered an institution. This position has no executive function and serves mainly as a reserve, representation of the government and control of the Chancellor. However, the President may propose legislation to the people of the state for a vote. As an institution, this position is not elected by the people of the state in order to ensure the greatest possible stability.

Chancellor: The chancellor is the executive head of the government. He appoints and dismisses ministers (subject to presidential approval) and may submit laws to the people for their approval. The Chancellor is elected on a five-month cycle on the Discord platform.

All Cabinet bills are submitted to the people of the state by the Chancellor or the President. The bills become law only if a majority of the votes is in favor.

In addition, it is possible for a number of 10 citizens to put a bill to a vote if the Cabinet does not take action itself at their request. It is also possible for a group of 15 members to appeal to the President or the Court of Justice for the withdrawal of a particular regulation. Also 15 citizens are needed to seek a constructive vote of no confidence in the Chancellor, after which a new election will be held.

In addition, each member has the right to appeal to the Court of Justice if he or she feels that his or her rights have been violated.

The Court shall act only on a call. It consists of one constitutional judge and two other lay judges appointed by the President. New lay assessors are appointed for each case, but they may not be the same person twice.

TFFG aims to positively impact Furry Fandom through a steady and orderly path. Since it is a roleplaying game that factually cannot govern the fandom, the government usually abstains from real political issues and tries to call for an optimistic view of the fandom through partnership projects and campaigns. 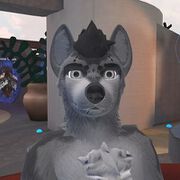 The second TFFG cabinet. The chancellor resigned due to personal reasons and dissolved the administration.

The third TFFG cabinet. The third administration is led by Chancellor Nylo El Lobo. He was elected chancellor after the new elections following Chancellor Turnip's resignation and has since governed TFFG according to the 'Lobo Doctrine' (work and advertise work).

Prior to his election as Chancellor, he served as Minister of the Interior under Chancellor Turnip. During this period, he drafted the TFFG Constitution. His main stated goals are to balance TFFG between seriousness and fun and to expand TFFG.