Whose Lion is it Anyway

From WikiFur, the furry encyclopedia.
Jump to: navigation, search
Community > Events > Conventions > Convention events > Whose Lion is it Anyway 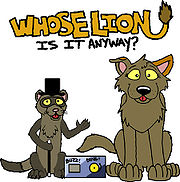 The "Whose Lion" logo featuring Alkali (left) and SemJay (right) and their "Buzz/Ding" box. Artwork by SemJay

"Whose Lion is it Anyway?" or "Whose Lion" is an improv panel hosted by Alkali Bismuth and SemJay. The panel got its start at Midwest FurFest 2006 when the panel was hosted by SemJay and Dronon. Dronon was unable to make Midwest FurFest the following year, so SemJay picked Alkali as his replacement. Alkali and SemJay have hosted the show together ever since. When Alkali and SemJay cannot make it to a convention together, the one that's going will host the show alone, but with the help of close friends. The original show at Midwest FurFest 2006 had about 60 attendees; more recently at Anthrocon 2010 over 300 people attended. Dronon occasionally hosts (or co-hosts) improv panels sporadically as opportunity permits (frequently at Furry Migration), although not always under the "Whose Lion" banner.

Like the name suggests, the show is based off of the television show "Whose Line is it Anyway?", except in this version the entire audience is encouraged to participate. Some people just come to watch, but many join in on the various games. "Whose Lion" is always scheduled late at night and is considered an 18+ panel due to adult humor and language.

Whose Lion has been at every Midwest FurFest since 2006. In 2009 they added Furry Connection North and Anthrocon to their list of conventions and in 2010, IndyFurCon was added. They also managed to have a show at Further Confusion 2010 despite a misunderstanding with the convention. The panel has also experimented with streaming their shows over the internet.

Throughout the two to three hour panel, there are many improv games played. Normally, SemJay and Alkali will come up with a list of games to play before the show, but if there is time they will take suggestions from the audience. These games are sometimes played differently from how they were originally intended to be played. The following is a list of some of the games played.

Dronon's games tend to include some of the above as well as: