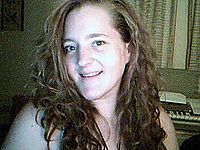 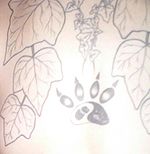 Closeup of the tattoos, with what is supposed to be a tiger paw with a wolf and bear paw as the inner Yin Yang

Julia Stubblefield, also known as Whiteirishtiger and WIT, is a furry from Missouri who was born December 12, 1970. She is the oldest and only female of her siblings. She has had two sons and gave the first one the middle name of "Wolf" and the younger son the middle name "Bear". These are the basis of the symbols in her tattoo of the tiger paw on her back.

WIT's main form is an anthro female, who is 90% tiger, that is primarily high gloss white with stripes so dark green they are almost black with tattoos of ivy coming down her back, starting at the base of her neck (reflecting the tattoos she has in real life). Her claws are of the second strongest metal unknown to man with diamond tips. She has furred fingers, large full fur covered breasts, and eyes of green-hazel that can change to blue. Asmodi, at her wish, gave her the abilities of having gills, a blowhole, and wings when called upon.

Her character has limited magic ability and chose not to learn more than she was naturally given until 2008 when she wanted to learn a bit more magic leaning toward the simple, useful, and healing. The magic she possesses is rarely shown and is neither great or harmful. WIT has played with only a few furries that know what this magic is. Only 4 furries have experienced it since 2005. Except for the tattoos, every detail listed above is the same in all of her characters. The only difference with this is that when she is a kitten, she doesn't know of her powers yet and appears as any ferral tiger cub would.

She can change shape at will but only Asmodi can force her back to her original form. The collar Asmodi put on her is made of the only metal she can not break through and encrusted with her favorite gem, Tanzinite.