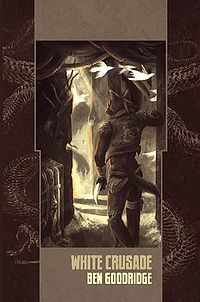 White Crusade is a science fiction novel by Ben Goodridge, published by Bad Dog Books in 2007. While initially aimed primarily at the furry community, the novel has also been made available on Amazon.com to allow a wider audience.

In a post-apocalyptic future, mankind is no longer the dominant species on Earth. A variety of anthropomorphic animals exist in primitive but harmonious tribal societies. Remnants of human technology still remain, and the more useful artifacts such as vehicles and weapons are valuable trade items.

In the novel, Tay of the Wolf-clan, the young leader of a multi-species tribe, comes into possession of a mysterious cube which a group called the White Crusade seeks to claim at all costs. With an army of nearly a million and very little regard for the lives of others or even their own, the White Crusade relentlessly scours the wilderness that was once the United States.

Together with two members of his tribe, the trader Zack and the technology-obsessed hermit Sonac, Tay flees from the Crusade for the safety of his tribe, encountering new aspects of the remaining human communities and discovering the power of the cube.

The novel employs several very common literary devices; the arrival of a dying stranger holding a mysterious and sought-after artifact hearkens back to the arrival of Billy Bones with the treasure map in Robert Louis Stevenson's Treasure Island. Goodridge frequently shifts focus to the leaders and soldiers of the White Crusade to show their progress in hunting down the protagonists, a similarly traditional technique.

Goodridge's use anthropomorphic animals as protagonists is validated by his attention to the differences between human and non-human anatomy in practical situations, such as the focus on hygiene of the fur, maintenance of claws and tails, and the different advantages different species have at particular tasks.