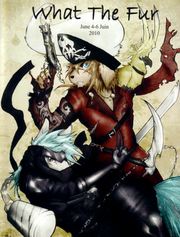 What The Fur 2010, the inaugural What The Fur, was held June 4-6 at the Espresso Hotel in Montreal, Quebec, Canada. The theme was "Pirates vs. Ninjas".

The Charity Auction raised a total of CA$738.60 (~US$694), donated to the St.Lawrence Valley Natural History Ecomuseum.

A conbook signed by the Guests of Honour, the entire dealers den and members of convention staff was also auctioned off at closing ceremonies of the convention, raising more funds for both WTF?'s charity, and for the charity of Furnal Equinox.

Max Blackrabbit and gNAW were the 2010 guests of honor. Both artists submitted several pieces of artwork for the convention, and Sponsor Prints. The two t-shirt designs for WTF? 2010 were provided by gNAW.

Registration opened on October 7, 2009 for attendance, panels and dealer's tables, with the hotel reservations opening on January 3, 2010. Regular memberships cost $30 to $40 Canadian, depending on the time of registration. Sponsors paying $80 to $90 received a t-shirt by gNAW, a breakfast, and will be receiving a limited-edition stitched shirt by mail.

WTF? kept its Gaming room and Headless Lounge open for the duration of the weekend.