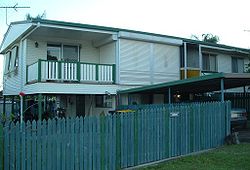 Westhaven is the residence of Marko the Rat and Ristin. It is located near Mount Gravatt, Brisbane, Queensland, Australia. It was originally purchased by Marko the Rat, Ristin and Broc in 2005, but Broc has moved out[when?] and sold his share to the other two due to work commitments.

To the best of the householders' knowledge it is the first wholly furry-owned and occupied house in Australia. The house name is derived from the street name and stuck due to a lack of suggestions for anything better. It was made official at the housewarming party (aka denwarming) on October 7, 2005.

Westhaven's denwarming was a great success, bringing together most of the furries in Brisbane at the time but it has not achieved the same level of success at being a focal point for furry socialising.

Marko passed away on March 7, 2018. At the time the current residents were the owners Marko the Rat and Ristin, their friend Groo, and the tenants Kllauw and Wolfsky.

Currently the residents of Westhaven are Ristin, Ashlyn and Snowpaws.