Wendall and Al, also known as the La-Z-Boy Raccoons, were a pair of raccoons that featured in television commercials for the La-Z-Boy furniture company in 1996-1999.

Wendall and Al were non-morphic, though able to speak fluent English. Wendell was the more cautious of the two and spoke in a whiny tone, whilst Al was more confident and had a deeper voice.

La-Z-Boy Incorporated was founded in 1927 by cousins Edward M. Knabusch and Edwin J. Shoemaker. Headquartered in Monroe, Michigan, U.S.A., the company has since grown to be the United States' largest manufacturer of upholstered furniture. and the world's leading producer of reclining chairs.[1][2]

Wendall and Al first appeared in 1996,[3] in a thirty-second television commercial designed to highlight the fact that La-Z-Boy made furnishings other than their well-known recliners.[2] In the commercial, the two raccoons break into a house whilst its owners are on vacation, in order to make themselves comfortable on the chairs and sofas. Wendall comments, "I just thought they made recliners", to which Al reponds, "It's a common misconception among raccoons".

In 1999, Wendall and Al returned for a second thirty-second commercial. Climbing down a tree to a window sill, the raccoons longingly peered in at a warm, well-furnished room. As they did so, the pair sung a fragment of Wouldn't It Be Loverly, the song written by Alan Jay Lerner and Frederick Loewe for the 1956 Broadway play My Fair Lady. This was the first time an advertiser had been granted a license to use a Lerner and Loewe show tune.[4] 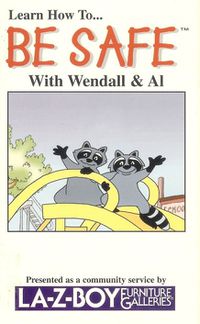 Cover of Learn How To... Be Safe With Wendall & Al

The Wendall and Al commercials were created by the Doner U.S.A. advertising agency.[5] The trained raccoons used to film the commercials were supplied by Steve Martin's Working Wildlife company,[6] and the post-production video effects - to make them talk and use human-like facial expressions - were done by Los Angeles-based computer animation company Rhythm & Hues.[7]

After a positive public response to the first commercial, La-Z-Boy commissioned plush and bean-bag versions of Wendall and Al, to be used as store decorations and customer incentives.[2] La-Z-Boy also allowed the two raccoon characters to be used in Learn How To... Be Safe With Wendall & Al, a personal safety video aimed at children.[8]