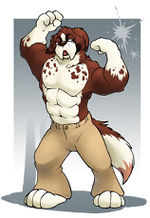 Brutus Bernard is a Fursuiter who is located in Atlanta, Georgia, USA. Brutus is an Army Veteran, having served one tour in Afghanistan attached to 3rd Group Special Forces as a Combat Medic. He was honorably discharged late 2015 and is currently living with his Partner, Leon Puppy. Currently, he is enrolled in Georgia State University where he is working toward earning his Bachelors of Science in Nursing. He is a regular staff member for Midwest Furfest, serving in the medical department since 2014. As of 2016, he has been active in the furry community for over 10 years.

Brutus Bernard's fursona a Saint Bernard dog. The idea for Brutus was originally to be a Villain character, and played upon history as the creator of this character was born on the "Ides of March", the day that Brutus killed Caesar. Over time, and through his military service as a Combat Medic in the Army, the character moved more in line with the St. Bernard rescue dogs, who better mirrored the beliefs and good nature of the characters creator.

Brothers in Arms by ChibiMarrow 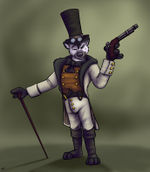 Hyde (Dressed as Reaver from Fable) by Mahrkale.

Brutus was constructed by Mixedcandy and was completed in November 2016. The suit was debuted at Midwest Fur Fest 2016. 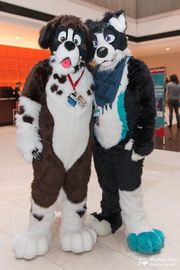