From WikiFur, the furry encyclopedia.
Jump to: navigation, search
Culture > Movies > Watership Down 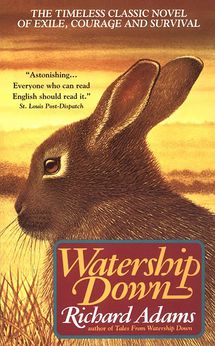 Watership Down is a novel by Richard Adams, first published by Rex Collings Ltd. in November 1972. The plot concerns the adventures of a group of rabbits as they set out to find a new warren. The whole novel takes place near the village of Laverstoke, a real-life location in England.

Although the rabbit characters of the book are anthropomorphized, they are also depicted with a large amount of realism, displaying behavior and motivations common to rabbits. Adams used R. M. Lockley's The Private Life of the Rabbit as a reference for rabbit behavior.

The rabbits in the novel use an invented language called Lapine, fragments of which are mixed in with the text. At least one word of this language has made it into Furry usage: flayrah, meaning 'great food', is the name of a Furry news website; quotes from the work are featured on the site, and an illustration of the Black Rabbit of Inlé by Kyoht on its maintenance page.[1]

Some people have extended Adams' fragments of Lapine into a speakable language.[citation needed]

After a young rabbit named Fiver forsees an imminent, terrible disaster at Sandleford Warren, he persuades his brother Hazel to leave the warren with a small group of rabbits. The Warren's leadership is their initial opposition, but they must face many more hazards, both natural and man-made, before they reach their goal.