Warszawa (pronounced war-seh-ZAH-wah) was born on May 19, 1981. A lifetime resident of New York, she calls Long Island home and shares her habitation with eight cats and two snakes. She's an active member of the Long Island Furs and each summer holds OMGWTFBBQ, a furry barbecue extravaganza originally started by Nekonaru Letao. 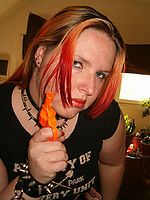 A writer and self-proclaimed "non-artist", Warzy passes the time working on non-anthro stories or drawing and picking apart her own anthropomorphic art. She's a known party girl who loves to go out clubbing and dancing, sometimes with fellow furs. During the summer months and into October she works two jobs but still manages to find time for activities like fishing, hiking, gardening, and throwing a barbecue whenever the weather permits. Prides herself for being masculine and tough-shelled while retaining her born femininity. A reputation for being a hissing and spitting lunatic seems to follow her, perhaps well-earned for acting on passion and speaking before she thinks on numerous occasions, but she always has a smile for friends and new faces.

Her interests range many things: dinosaurs, computers, cars, and the aforementioned hobbies and activities are only a few. Every year she attends Botcon, a Transformers convention, and the local sci-fi convention I-Con (until 2017 when it ran out funding). She also regularly attends ANE, Furpocalypse, and Furrydelphia conventions.

A resident of the internet since 1995 and of the furry fandom since 2004, Warzy knows better than to take herself seriously and is the first person to laugh at herself in any situation. She attempts to keep herself in the outer circles of the furry fandom, preferring real life to what she calls "the rampant drama", but the friends she's made and the love for anthropomorphic art keep at least one of her feet planted in furry. 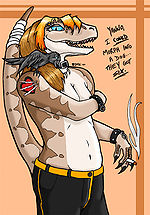 The character Warszawa is not a direct translation of the person behind her, but more of "who I am on the inside. Sort of." A polymorphic Velociraptor (with hair), tan with chocolate stripes/spots and blue cat's eyes; an orange star on her left shoulder, a red heart on the right shoulder with scars running through it, and a bandage keeping the tip of her tail from drooping. She hails from a tribe of desert creatures and is considered a spiritual guide by her people, often leading in dances and rituals that one could attribute to those of Native American peoples. Aside from keeping to traditional ways, her people are modern - Warszawa often spends time in the nearby city with her friends, living it up and having a ball and acting as the free spirit she loves to be.

Sometimes Warszawa is depicted along with a blue-eyed black crow who goes by the name of Dublin; this is her own spirit guide, a doppleganger manifestation of her subconscious that she turns to for advice and guidance. Dublin is quite wise, but he's also somewhat of an instigator and has a very crass nature about him - and a sense of humor.

Warzy's literary characters, although human, often make appearances in her art as anthropomorphic critters - the two most prominent being Ralph and Snakes. She contends that these two are closer matched to herself than Warszawa is; they're like a subconscious reflection of the dual parts of her personality.

Ralph is depicted as a dragonoid ginger boy, thin and awkward looking, bright red hair with big blue eyes and a slew of freckles; fun loving, free spirited, manic, promiscuous, emotional, and quick-tempered. Snakes is a muscular bruiser who's drawn as a raptor/tyrannosaur hybrid, with long blonde hair and steely blue eyes; quiet, contemplative, not quite mysterious but not an open book either - he's often seen in more violent images due to "issues with anger management" and a penchant for blood. Both boys are assassins by trade, Ralph being the boss and Snakes his right-hand man, and one might notice a slight amount of sexual tension between them.

Warzy contends that if you combine them both you would end up with a highly projected version of herself. And usually following that is the phrase "It's a Freudian field day."

Having attended art school for three years before deciding that Advertising wasn't the career she wanted to follow, Warzy picked up her pencil and started drawing after years of not touching a sketchbook. Her style of drawing will change with her mood, but often it's energetic and erratic - a bunch of little pencil scratches making up one complete drawing. She's still learning and refining her own style, changing things that bother her about it as she goes along. Having never learned to shade properly despite all the art classes, she makes the attempt anyway - and thankfully now knows better than to abuse the Dodge and Burn tools.

The subject matter of her drawings also changes with her mood; some is comical, some is sexual, and some reflects feelings and emotions of the time. Every now and again a digital painting will emerge amidst the cartoon-like dinosaurs, but those are often reserved for the Scrap Gallery.