Warfare (Adam Prime) is a character in Extinctioners. He first appeared in Extinctioners volume 2, issue 3: "Countdown to Extinction" Part 4. The story and pencils were by Shawntae Howard, inks by Sara Palmer, and lettering by Carole Curtis and Fender. 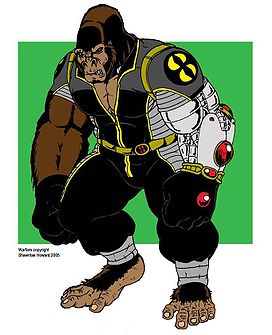 Prototype Prime, Warfare was created to be the ultimate weapon in his masters' plan of reacquiring the planet of Alden. A blend of machine and flesh, he was made for the sole purpose of being a biological weapon of destruction.

Constructed from the DNA of the last surviving gorilla left on the planet Earth, his creators found the process had left Warfare horrible deformed due to weak extracts of DNA. This weak blend caused Warfare to be a below average intelligence, yet surprisingly strong and dangerous creature.

Fear of seeing the last elements of gorilla DNA and years of research go to waste, Warfare's masters developed a cybernetic technology that allowed them to blend flesh with machine. Dubbed psibernetics, his masters were able to create a mechanical brain that enhanced the intelligence of any creature using it by installing a highly sophisticated artificial intelligence within its host. It was hoped that if successful with Warfare, armies of easily controlled psibernetic humanimals could be created for the purpose of fighting wars and doing slave labor. That is, in theory.

Warfare's psiber allows him to instantaneously process combat and survival information and develop effective counter measures. This makes him extremely difficult to defeat with the same tactic twice. His cybernetic arm allows him to generate energy based weapons, which can be used for offensive and defensive purposes. It also enhances the overall strength of his body. Warfare's overall construction, however, was not completed (as evident by the visibility of his cybernetic arm and left eye). He was promised that by obedient service and loyalty that he would be completed, but those hopes were never brought to fruition. It's not completely known whether Warfare is more organic than cybernetic and his true motives have yet to be revealed.

Originally dubbed Gorilla Warfare, Warfare is one of Shawntae Howard's oldest anthro comic book characters. Created back in 1989, Warfare wasn't used much. In fact the very first picture of him was the only time he was drawn for years until the idea for Extinctioners first appeared. It wasn't until a good while after his conception that Warfare finally began to flesh out visually as a character with a look he would have until just recently.