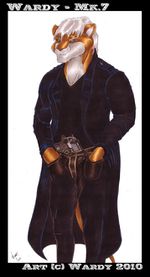 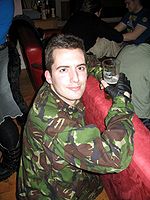 Major Ward' is a furry artist and member of the U.K Furry Fandom. He has a (predominantly) lion fursona.

Hailing from the Midlands, Major Ward currently resides in Chesterfield and has also lived in several locations throughout the UK, most notably spending three and a half years in Southampton.

He has been a member of the furry fandom since 2002 after going to see The Lion King musical with TK Tiger. His initial reluctance about the fandom was soon overcome when he was warmly welcomed at his first furmeet, and he regards this as a pivotal moment in his life, changing it for the better.

Although Major Ward dabbles with writing (both fiction and articles), his main creative output is artwork.

The character Conrad Victor Ward was initially created for a discontinued, furry parody of La Femme Nikita, written by Simbani. He was the chief mechanic for Pride One and was also their best driver. He was initially well built with short cropped hair as opposed to a mane, something that would later be explained by being part-lynx. Since then the character has developed extensively, mostly through his actions in an online RPG called Thunderbolt Black. Through this RPG, he took on the name Conrad Victor Ward and his backstory has been established and made canon.

Although Conrad's physical appearance has been changed many times in his existence, several characteristics have remained the same. The main ones being his relatively short, unruly hair, bright blue eyes and being much more slightly built than most other lions. This was down to his somewhat unique genetic makeup and, out of character, Wardy not wanting to make his fursona overly buff.

At first his hair was initially dark brown but it was soon changed suddenly to a brilliant white colour. The change was first explained as the result of a prank in which someone replaced his shampoo with peroxide. However, after the character was retconned to make him fit into the Thunderbolt Black RPG better, it has since been established that his hair has always been white, yet another legacy of his genetic "impurity".

He has always been interested in cars and is an accomplished driver, citing his driving heroes as Mad Max, Elwood Blues and The Stig. His early nickname was "The Lead Footed Lion" but very few people, including himself, refer to him as such anymore. In the current Thunderbolt Black timeline, he drives a customised replica of The General Lee, fitted with a 500bhp Hemi-V8, coilover suspension and uprated brakes. In his "post" Thunderbolt Black years, he has been seen driving a black, supercharged 1988 third-generation Chevrolet Camaro, which is purported to be fitted with a 502ci big-block V8.

Major Ward's main "hobby" is his artwork although he himself claims he has a very lax work-ethic and wishes he was more prolific. He also likes to read, watch comedy and socialise with his friends amongst other things as well as being a big fan of the Mass Effect and Fallout series of video games.

He has a keen interest in cars, aircraft and engineering in general.