Forcewave (Walice Weazel) is a character in Extinctioners. He first appeared in Extinctioners volume 2, issue 3: "Countdown to Extinction" Part 4. The story and pencils were by Shawntae Howard, inks by Sara Palmer, and lettering by Carole Curtis and Fender. 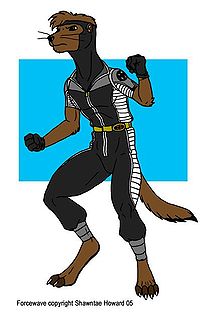 As a young pup Walice had a rather rough life. The oldest of three males, his family was very poor. His mother and father would travel from town to town to find work to support his younger brothers and himself. The stress and challenge of finding decent work put a real strain on his family, especially his father, who began abusing drugs to escape their difficult times. As time went on and work became more difficult to find Walice's father became more and more abusive towards his mother, his brothers and himself, until one day when he was 13, his father went on a rampage, beating his mother severely. Walice, fueled with rage, lashed back at his father and used his telekinetic powers for the first time. The blast threw his father against a wall, crippling him from the waist down. Shocked and frightened by what happened, Walice ran away from home, afraid that he might also hurt his mother and brothers.

Walice would spend the next five years on his own, going from town to town and finding trouble where ever he went. Now unafraid to use his power to lash out at others Walice found himself getting into fights with anyone who would challenge him. Unlike most telekinetics, who would develop their power to lift objects with their minds, Walice uses his powers as a telekinetic pulse wave, which is fueled by his pure force of will. Walice's "force waves" can punch holes into mountain sides if angered enough.

It was during one of his many travels between towns when Walice first came into contact with the humans that were kidnapping hybrids. When approached, instead of fighting them when given the option of serving willingly or as slaves, he choose to go along with them since he didn't have anything better to do. Now as one of the human’s elite humanimal Hunters, Walice was given his choice of females as a gift for his loyal service, and thus met Cee Cee. Little did he know that it was the humans' plan of breeding hybrids to develop more powerful breeds. At first their relationship was purely physical, to him at least, but when Cee Cee became pregnant, Walice began to notice his true feelings of love towards her. The loss of their son, William "Billy" Weazel however, has greatly disturbed Walice, causing him to act even more aggressive than usual towards others especially Cee Cee. Why he has decided to stay with her and the rest of the Extinctioners has yet to be determined, but something from his past haunts him that he will do anything to keep from the others.

Shawntae says that Walice is an interesting character to write and draw. Originally, he had him die in the very first mini comic he did, not seeing him as all that interesting at all, but as time went on and his character developed there was something about him that made Shawn want him to stick around longer.[citation needed] His relationship with Cee Cee is rocky at best and could lead to some shocking developments.