Walibi is a European amusement park and entertainment brand with a kangaroo mascot by the same name. Park installations include Walibi Belgium aka Aqualibi in Wavre (near Brussels; founded in 1975 as Walibi Wavre); Walibi Holland (previously Walibi World and Walibi Flevo) in Biddinghuizen, Flevoland Province, Netherlands; Walibi Sud-Ouest (formerly Walibi Aquitaine) and Walibi Rhône-Alpes (both in France). The series of parks is owned by CDA Parks, a subsidiary of Compagnie des Alpes. 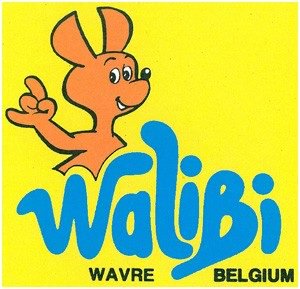 In November 2010, Walibi opened a preview website titled "TheMusicBattle.com" at which they began to slowly reveal characters for a fictional band (eventually named "WAB" or "Walibi's Adventure Band"). Over the following months, more characters were added, including Zenko (a monkey drummer), Haaz (a feline guitarist), Fibi (a female humanoid vocalist), and Walibi (a kangaroo - not a wallaby). Afterwards, another fictional rival band was added to the roster of characters of TheMusicBattle.com, "Skunx", led by Walibi's "evil twin brother", Squad.[1]

The fictional bands were part of Walibi's corporate re-branding,[2] intending to reach current generations of younger children, transcending the original meaning (Walibi Wavre is located near the towns of Wavre, Limal and Bièrges) and Walibi's cartoony, feral design, which had changed relatively little since 1975.[3] The work was originated by a brief in June 2007, developed by Cube Creative and went into full production in December 2008, before being teased in late 2010 and fully released for the new season in April 2011.[4]

Several music videos and a band battle were created and played on a local children's television channel. The band was subsequently the basis for a "4D" film with vibration effects,[5][6] as well as several play-areas and attractions for tweens and younger children, as well as a comic with sticker packs in Carrefour.[7] There was also a 20-episode comic made in Hong Kong,[4] however as it was distributed as Flash it does not appear to have been archived.[8]